The Sufi Abu Madyan Shuaib Al-Tilimsani in the Literary and Folk Imagination
Sufism passed through Algeria in five stages. The first was austerity, especially in the first two c...

Raising a Child in a Rural Community: A Study of Rural Folk Beliefs
The rural community is replete with practices that people resort to in response to diseases, crises ...

Arabic Folktales: Origin and Fate
This paper focuses on aphorisms in Arab folk culture. The proverb is a literary expression, and the ...
53 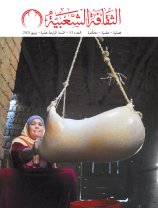 PDF
A Word from the Editor: The Poet is Anonymous No More
Issue 53

The people who created folk art usually did so anonymously. For many years, folk songs were passed down and modified by different generations without any attribution to their creators. Then the ‘Nahham’ emerged. A singer who performed traditional songs and prayers in order to motivate and entertain divers, the Nahham set the rhythm for rowing and led the chorus. With their mastery and rich voices, these singers were considered the creators of folk songs with well-known melodic modes, such as the sailors’ songs of the Arabian Gulf and the arts of ‘Sawt’, ‘Samari’, ‘Khamari’ and ‘Bastat’.

Folk literature is the cultural and social representation of a people. Folk literature reflects the importance of history, and people share it, enjoy its content, and preserve it and its symbols in the same way that they preserve all their most precious possessions.

To this day, the people of the Bani Zeroual tribe in the far north of Morocco celebrate changes in the seasons with rituals that have distinctive cultural signs. The most famous of these celebrations are ‘Al-Hakouz’ in winter and ‘Ansarah’ in summer.

Although modern medicine has developed considerably, folk medicine has not been eliminated because it and its traditional dimensions still play a role in Arab societies. Empirical studies that recognise the significance of folk medicine have confirmed that many groups use both modern and folk medicine.

Researchers agree that folktales are ancient, and that they arise spontaneously and represent the spirit of the group. They reflect the group’s struggles, hopes and beliefs, and serve as a means to express the elders’ imagination and experiences. A communal legacy, storytellers contributed to the creation, development and modification of folktales. It is difficult to determine folktales’ origins or authors, particularly as oral stories have been shared across civilisations as a result of migration, trade and travel.

Read more
Raising a Child in a Rural Community: A Study of Rural Folk Beliefs
Issue 53

The rural community is replete with practices that people resort to in response to diseases, crises and the deaths of infants in an effort to protect children from threats such as false accusations, envy and witchcraft and to heal chronic diseases that have failed to respond to formal medicine.

This paper focuses on aphorisms in Arab folk culture. The proverb is a literary expression, and the majority of people understand its message. This distinguishes it from all other literary expressions except the folktale. If religion is for all human beings and the same is true of the folktale, then the folk proverb is similarly anchored in the individual and collective conscious.

An ancient lyrical heritage with a rich history, the Sufi Hadrah occupies a prominent position in the countries of the Arab Islamic world, in East Central Asia, and in the African countries that border Arab countries.

Sufism passed through Algeria in five stages. The first was austerity, especially in the first two centuries after Hijrah, while the second stage followed the first. The third stage was about pure Sufism rather than asceticism and, in the fourth stage, Sufi orders emerged and their practices and rituals developed in the fifth century AH. This was followed by the final stage, which has lasted until the modern era, when Sufi rituals and practices became more prevalent and many Sufis started claiming that they could perform miracles. During this stage, Majzoubs appeared, as did the idea that the Divine can be found everywhere.

Read more
The Changing Features of Musical Culture in the Arab World: A Critical Reading of Historical Signs and Their Implications
Issue 53

Most of the information about the history of Arab-Western relations that has been reported by both Arab and Western sources confirms that a relationship was established a long time ago. However, the Western model and Western music first started to influence Arabs at the start of a gradual fusion with Western civilisation during the French campaign in Egypt (which is also known as Napoleon Bonaparte’s campaign) in 1798.