Towards A Cultural Understanding of Folklore Moroccan Group Dance as a Model
This paper seeks to highlight the role of folklore in achieving cultural development and to highligh...

A Study of Husa in Iraq
First: The study proved that Husa is a tribal art that originated in the Euphrates countryside, spec...

Songs of the Sage, "Sharqa" And the Hymn of God "Sharqan" The Relationship between the Oral Agricultural Heritage in Yemen and Pre-Islamic Literature
Oral heritage has an important role; it is what first human communities relied on to preserve and co...
48 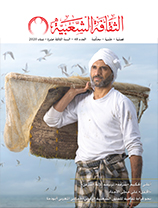 You can download the issue (PDF) from this link
Download
Songs of the Sage, "Sharqa" And the Hymn of God "Sharqan" The Relationship between the Oral Agricultural Heritage in Yemen and Pre-Islamic Literature
Issue 48

Oral heritage has an important role; it is what first human communities relied on to preserve and communicate knowledge, culture and experience. Most forms of literature were oral before the introduction of the written word. This is clearly evident in the civlizations of the Southern Arabian Peninsula whose communities, like the ancient eastern communities, depended on their memory. This is also the case with the Yemeni communities, although Yemen has known writing as early as the 10th century BC. The ancient Yemeni civilization used Musnad script until the 6th century AD, when it was replaced by Arabic writing with the replacement the Northern Arabic with the Southern Arabic (the language of the central Arabian Peninsula known as classical).

Oral memory remained an essential medium in culture for successive generations of people whose culture and language had undergone transitions. It allowed them to remain connected and truthful to their past. This is clear in the spoken language, some folkloric practices and the intangible heritage, which are connected to ancient Yemen.

There is a kind of ancient literature, which is still alive in the oral agricultural culture. This is what I address by studying a model case, as discussed thoroughly in a book on this subject.

The study seeks to answer two central questions. The first is to ask were there literary, religious - agricultural stories or hymns in ancient Yemen, and are they remain alive and active in the oral culture in the form of proverbs, wisdoms and work songs?