Aspects of Common Beliefs and Practices of Mesopotamia and Ancient African Peoples
Even if we do not consider literary texts in and of themselves important as a record of incidents an...

Anthropological Approach to African Tattoos in Saudi Novels
This paper focuses on tattoos and facial scars, which are deeply rooted practices in African culture...
47 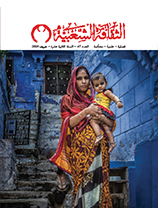 This paper focuses on tattoos and facial scars, which are deeply rooted practices in African culture, as well as religious rites and rituals that serve several functions.

Tattooing has been referenced in the novel "Sky over Africa" as a cultural phenomenon of private gangs and criminal organizations. According to the researcher, it has a psychological function, based on its presence within the different contexts of the novel and its interpretation. Tattoos reveal the internal feelings of the individuals.

Maymouna and Fikhakh Al Ra’iha novels reveal the social function of the facial scars phenomenon. The African tribes consider the tattoo or the facial scar, its form and where it is placed, as part of the identity of its members. The researcher considered the two phenomena (the tattoo or the facial scar) as expressive tools loaded with aesthetic values. They reflect the spirit of the community and establish symbols of rich meanings. African tattoos and scars, which reflect the uniqueness of the artist’s creative ability, are important means of collective expression.